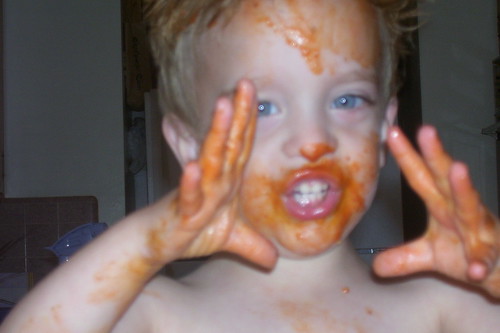 I did 2 things for the challenge: washed similarly spaghetti-coated loads with each product, then observed the general results of each product over the course of 2 weeks…WAYYYYYYYYYYY scientific…

First, I have to give Electrasol one strike right off the bat-it has a flip-top cap. Which under normal circumstances would be ok, but when you have Houdini Jr as a son, and said son has foiled every child lock known to man-it doesn’t fly…BAD Electrasol!

After the double spaghetti trial, it seemed that each did a equal job at cleaning both dishes and glasses. Upon further examination, the Electrasol left a bit more remnants of my oh-so-excellent dinner on the pot I cooked the sauce in, but left absolutely no spotting on the glasses. The Cascade left my dishes spotless, but the glasses could have been a bit less cloudy.

During the 2 week trial, both perfromed equally well on normal loads, but the Cascade edged out the Electrasol on really messy and/or dried on foods. One thing I really paid attention to was sippy cups. My sons manage to leave them everywhere, and I am really squeamish about even 2 hours-old milk in the cups-I want them practically sanitized. Cascade really comes through here, while the Electrasol left a bit of a (gag) smell in them.

So…after 2 rounds, the winner (by a queasy tummy): Hey! It is nice to meet you!

Yum - the chilaquiles at @brokenyolkcafe are insan

So excited to share my latest project - Jen @cityf

Rubber duckie you’re the one…💛

This project was SO fun to work on - @andi_fisher

Get the latest in your inbox!